Delaware Dual Language Immersion programs provide students with a seamless K-12 language and content-learning experience including four components. Each component builds upon the previous to ensure continued growth in both language proficiency and academic content knowledge. Students who complete all four components of the program will be assured of becoming bilingual, biliterate, and able to successfully navigate multiple cultures in multiple contexts, thus being ultimate prepared for college career and life. 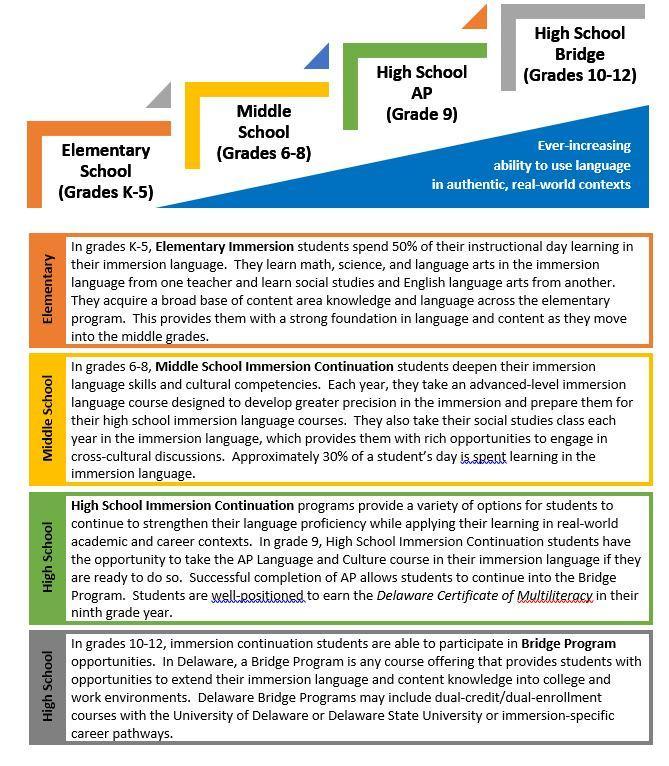 Did you know that Spanish is the official language of 20 countries? Or, that there are approximately 440 million Spanish speakers worldwide? Spanish is the second most spoken language in the United States and, according to a recent Bloomberg report, the fourth most important international business language after English.

Immersion education is the most effective way to learn another language. In addition to developing oral proficiency in the language, students become biliterate as they simultaneously learn to read and write in Spanish alongside of English. Students are taught by certified teachers that have advanced-superior levels of proficiency in Spanish.

Top 10 Reasons for Enrolling in an Immersion Program

TED Talk: the benefits of a bilingual brain
https://www.youtube.com/watch?v=MMmOLN5zBLY&feature=youtu.be

This video from the TED ED YouTube channel explains the different type of multilingual speakers and how speaking multiple languages helps your brain stay healthy. Generally, the earlier a child can start learning a language, the better, but even adults who learn a second language can benefit from it. Your brain can show more activity and a higher density of gray matter that contains your brains neurons and synapses. It’s also possible that knowing and speaking a second language on a regular basis can help delay the onset of Alzheimer’s and dementia.

The Center for Advanced Research on Language Acquisition (CARLA):
http://www.carla.umn.edu/index.html