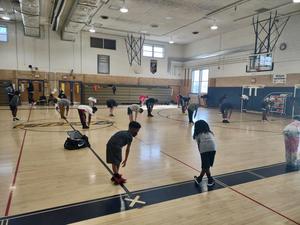 On Saturday, December 18th, former Seaford High School Basketball Players & Alumni, Juwan Mullen & Andre Matthews, hosted the last of a 3-camp series called the FullCourtPress Camp which was a basketball skills camp for 2nd-8th grade students in the area. Seaford high school’s current hoopstars Brent Ricketts, Tyrese Fortune, Kashmier Wise, Aviyon Matthews, Akendre Matthews, and Zion Mifflin joined Matthews and Mullen as the trainers of the camp. The SHS basketball team is currently ranked #1 in the state of Delaware. Mullen says “I think it’s really important for the high school guys to understand the impact they have on the youth, especially right now, and how they can use that impact to help give back to the community.” Matthews agrees, “Everything that we do is for the positive development of our Seaford youth. Whether its mentally, emotionally, physically, or athletically, we try to stay very intentional about putting efforts towards community growth through its future leaders.”

Matthews played 4 years of basketball at Delaware State University. He was inducted in DSU’s basketball hall of fame and was a part of a team that changed the program around for the better in future years. Matthews graduated from DSU in 2003 and earned his Bachelor’s degree in Social Work in the 4 years he attended. Matthews went on to obtain his Master’s degree in Special Education with a concentration in Autism/severe disabilities from University of Delaware in May 2021 which led to his current position in the school.

Mullen played two years at Delaware Tech Stanton and two years at Cheyney University. He, like Matthews, excelled scoring over 1300 points in his college career and graduating from Cheyney with his Bachelor’s in Psychology in 2016. Mullen went on to Delaware State to obtain his Masters’s degree in Social Work in 2018 which led him to his position at the high school. Mullen is also currently studying for his Doctorate in Prevention Science at Wilmington University.

Furthermore, FullCourtPress (FCP) is a basketball/mentorship-based organization started by Juwan Mullen which was created as an engagement strategy to help fight against gun violence. FullCourtPress was inspired by the tragic death of Jeffrey Lorenzo Akins in August of 2020. Jeffrey was a community leader, activist, coach, and mentor right here in Seaford. He was also one of Mullen’s best friends and Matthew’s mentee. So, it’s not a surprise that Mullen and Matthews chose to honor him by doing the very thing he did for Seaford when he was alive, which is coaching, mentoring, and running camps for the same kids Jeff worked with.

The hosts would like to give a special shoutout to the Seaford Parks & Recreation Department and Jeffrey Benson for lending a hand in the event. Lashyra Williams, who was a really close cousin of Jeffrey Akins and a former superstar women’s basketball player at Seaford High school, joined the team as well.

Even with the camps being over for now, Mullen and Matthews will continue to give back to the Seaford Community, utilizing their professional and personal roles while honoring their dear friend, Jeffrey Akins.


(Each one of the Student Athletes dedicated 6 hours of their time to the skills training program).