Central 3 Honored at SSD Board Meeting 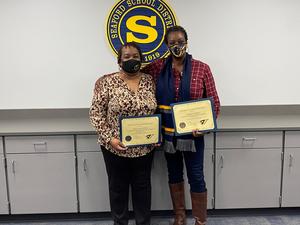 Ms. Kellam and Ms. Phillips pictured above accepting certificates as the SSD Board of Education honored the “Central 3” and the first African-American administrator at Central Elementary.
In 1954, the Supreme Court case of Brown vs the Board of Education ruled that racial segregation in school was unconstitutional. Although it would take some time, the schools in the Seaford School District would eventually desegregate.
In the 1960-1961 school year, escorted by police and surrounded by protesters, three students, Carol Cook Kellam, Alvin Cooke, and Samuel Jones, courageously entered Central Elementary as the first African American students to integrate the building. The Central Three opened doors of equity and inclusion for countless future generations of Seaford students.
In the 2012-2013 school year, Seaford School District alumna Chandra Stewart Phillips, became Associate Principal at Central Elementary, the first African American administrator in that building. Her mother is Carol Cook Kellam, one of the Central Three who integrated that very building. In the span of one generation, African Americans went from being denied entrance to the school to being in a leadership position. This is a historic achievement of which our district should be extremely proud. It is a story that should be told for generations of Seaford School District students and staff to come, but especially those who walk the halls of Central Elementary.